That's according to Maya Eden in a paper elegantly titled The Week. Dr. Eden presented her work at a New York Fed seminar yesterday on this issue near and dear to my heart.

Eden's presentation of some of the background of the modern week included some joyfully quirky tidbits:

In the model, labor productivity is a function of "fatigue" and "memory". Fatigue is straightforward: people get tired. And when the are tired, they are less productive and make more mistakes. This is the same issue that causes The Atlantic or The Economist to publish thinkpieces on or around labor day about reducing the work week.

After including a utility framework and calibrating the model, Eden makes some arguments about productivity and social welfare. Right away, the modern week is swept into the gutter -- for no vectors of admissible model parameters is the modern 5-2 week socially optimal.

Rather, as she told us,

There is never a cycle with more than one vacation day that is optimal.

There are productivity gains for having more Mondays per week.

Given Eden's calibration, the optimal i-j weeks (cycles of workdays followed by vacation days) are either 2-1 or 3-1. Here, it is interesting note that both decreasing and increasing the share of vacation relative to work days as compared to the current 5-2 week can lead to welfare gains. 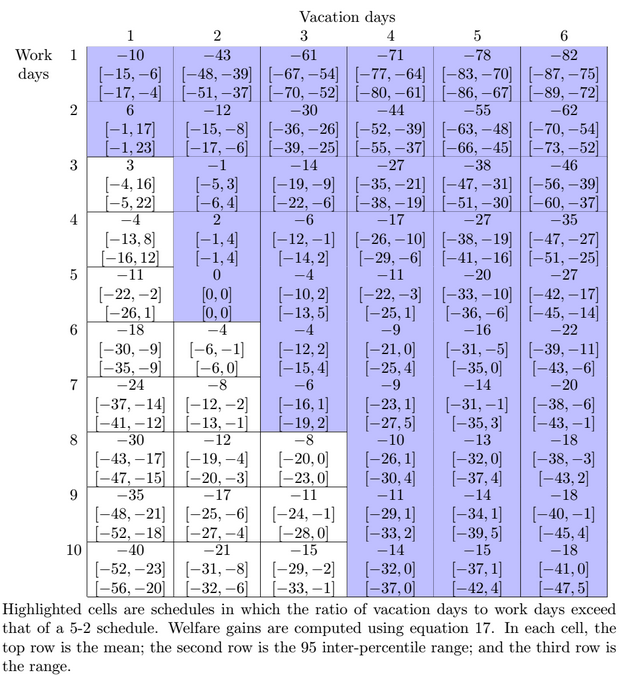 My beloved proposition for a 5-3 week did not meet with as much support as I had hoped. In the table above, you can see that the 5-3 cell has some mass on welfare increasing but is welfare reducing on average. The parameter calibration is an important factor here. (Though hark, let welfare arguments not be the end of us.)

I asked a couple friends what they thought of the proposal for a 2-1 week. Universally (N=3), they were disinterested. Concerns mounted around the shortened weekend, which would increase the relative effect of harumph hangovers. With one day weekends, one additional vacation day would be needed to increase the weekend to consecutive days off; and while two additional vacation days would increase the weekend to four consecutive days off, this wouldn't be any different than the current model. The fact that 2-1 weeks would lead to around 17 extra days off per year was lost in the analysis.

"It's like every weekend is a Sunday only, and Sundays are the worst weekend days!"

"Right, but the first day of every week is like a Thursday."

The optimal arrangement of the week remains an open question. Eden's model could use some additional features and improved calibration (with less of the "magic macro wand"). I'm also interested in seeing some (not-really) serious proposals for how changes in the week could be implemented and the costs thereof. Until then, let's get some ramen on Micahday and catch up.